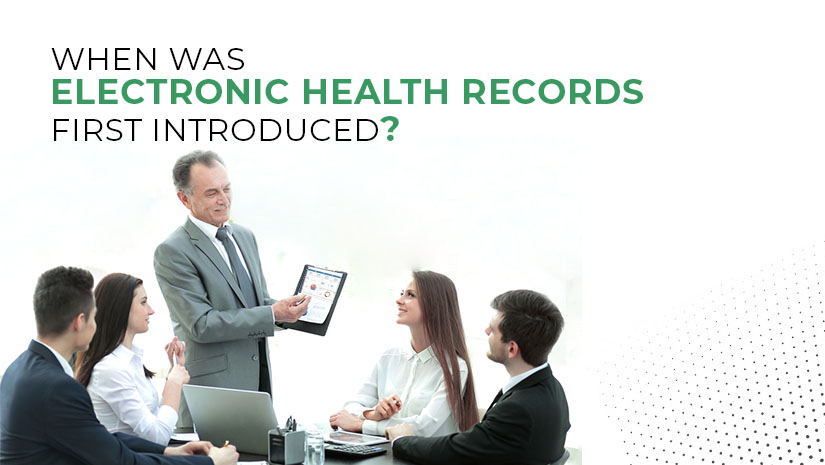 Although the concept of computerized medical records has been around for a long time, EHR turns out to be more popular nowadays. Before the advent of the electronic health record (EHR), organizations used handwritten notes, typed reports, and test results. They used to save this medical record in a file. Fewer medical facilities now use paper medical records. But most healthcare services are leisurely proceeding toward electronic medical records.

During past decades, a number of variations came into sight in the health records. The journey starts from paper documentation to the use of digital devices like computers and tablets. When was the electronic health records first introduced?

The evolution of EHRs kicked off in the 1960s when the Mayo Clinic in Rochester, Minnesota, started using the EHR. In the beginning, the EHRs were so expensive. The government used EHRs during the 1960s in alliance with health organizations. In 1970, only the biggest hospitals could use the EMRs for scheduling and billing.

In the beginning, the hardware resources were very expensive. Most hospitals and healthcare organizations could not acquire a tremendous amount of hardware systems to shift their manual medical records to electronic records.

During the 1960s, the Problem-Oriented Medical Record approach was introduced as one of the first ventures. It helped the healthcare organizations capture the structured data from the patient’s complete medical history. The Problem Oriented Medical Records encompassed progress reports, care plans, complaints, medical history, diagnosis, and medication. This approach developed the basic principles we follow today to collect structured data. So the EHRs can share this structured data in different forms.

As computers became cheaper in the 1980s and 1990s, so did electronic health records. However, the pace of adoption of EHRs was quite low. Then after the 2000s, with technological evolution, EHRs also underwent drastic changes, and finally, the most advanced and improved EHRs are now available for use in the healthcare sector.

In 2004, US President George W. Bush ordered to use EHRs nationwide by 2014. US Government developed the Office of the National Coordinator of Health Information Technology.

In 2009, the next President Barack Obama also asked to continue the adoption of EHR. During his regime, EHRs included in the American Recovery and Reinvestment Act (ARRA) of 2009 as part of the Health Information Technology for Economic and Clinical Health Act (HITECH). According to this legislation, EHRs made mandatory to use in the healthcare sector to achieve the technological demands by 2014. According to American Recovery and Reinvestment Act ARRA 2009, the government started funding providers on adopting the EHRs to improve patient care.

Consistent with its history of health innovation, Mayo Clinic also started publicizing the use of EHRs. The Mayo Clinic started the process of incorporating its various practices between 2013 and 2015 to promote information sharing both within and outside of its healthcare system. In 2015, Mayo Clinic CIO Christopher Ross announced that the system would migrate to a single EHR by 2018.

Another watershed moment occurred in 2016. President Obama’s 21st Century Cures Act of 2016 mandated that all new EHR systems developed in the United States utilize a common language – HL7 FHIR – and have an application programming interface (API) over FHIR – SMART, allowing data in the system to be accessed. It opened the door for new heights of system interoperability.

The requirements for healthcare practices change along with patient demands and needs. To address these needs, EHR solutions will continue to develop. The top priorities for providers and EHR companies will continue to be enhanced communication and interoperability.

Although some private practices continue to use a blend of paper-based and computerized records, EMR software and EHRs are progressively moving away from paper-based records as things stand. Besides data technology becoming more portable, comprehensive, and securely stored, patient records are now more accessible than ever.

By the 1990s, healthcare organizations used computers only occasionally for record-keeping in medical offices, and technology had already permeated most of them. EHRs specifically included image scanning for document capture and data interchange for claims processing, and they were primarily used at academic inpatient and outpatient medical facilities

Extensive changes didn’t start to show up on the front of electronic health record-keeping until the internet era. The internet developed into a crucial tool for storing and transmitting prescription histories and other electronic medical records even in its early stages.

The majority of the developed world’s major medical systems could finally easily communicate with one another in the last ten years or so. Software for electronic health records is no longer an extravagance; it is essential for HIPAA compliance and the best patient care.

Thanks to AI in the EHR, businesses can dismantle data silos and derive novel clinical insights from structured and unstructured data. AI uses structured and unstructured EHR data to present a complete picture of patient health, streamline processes, and offer insights. Only when clinicians have access to pertinent and useful patient data can they interact with patients more effectively. AI in the EHR offers the adaptability and clarity required to handle the rising clinical complexity of today.

The healthcare system already employs machine learning and artificial intelligence (AI). The hospitals utilize machine learning and AI to collect information and make analyses and conclusions. The analysis and interpretation of medical images is a fascinating area for AI in medicine.

A further application of AI in medicine is pathology, where machines will examine tissue samples to interpret biopsies and spot particular patterns. Confirming the diagnosis of the majority of diseases depends on this.

Many EHR Software Companies envision a time in the future when cloud based EHR software will be equipped with artificial intelligence (AI) and machine learning capabilities and linked to a variety of new internet of things devices (IoT).

A number of industries, particularly enormous corporations like Google and Amazon are using big data, which you have probably heard of. However, the healthcare industry uses big data to process patient data and produce predictive analyses. Fighting the opioid crisis in the US is one useful application of big data in healthcare.

Due to a lack of compatibility in EHR systems, the healthcare industry is not yet prepared to adopt the fifth generation of technology. Integrating 5G into health systems will affect the overall dimensions of care delivery’s application and quality.

One of the trends anticipated to take off is the use of precision medicine to perform predictive analyses and create valuable graphs.

This predictive profile is implemented to enable a new individual to make better decisions and allow the EHR system to enhance patient experience and care. EHR systems are now a more dependable and practical source of patient healthcare data due to these factors.

Healthcare organizations can share and access data across other cross-organizational systems in addition to those already in place, thanks to EHR/EMR interoperability. Interoperable systems can eliminate inessential and time-consuming tasks. Interoperability implementation can enhance communication with other medical facilities. Providers can avoid medical mistakes like misdiagnosis. If they can quickly gather and analyze the required data with the aid of interoperable systems.

Secure patient access to their own health information is vital as the healthcare sector transitions to electronic records. Patients are better informed and more involved in their healthcare when they access their medical records. Better health outcomes and greater patient confidence in their providers result from enhanced patient access.

EHR stores information on devices like wearables, CGs, EKG monitors, and other Internet-connected devices. Medical professionals can keep an eye on their patients from any location in the world thanks to IoMT (Internet of Medical Things). Other connected devices check that patients are taking their medications as directed, track fitness and weight, check blood pressure, and measure oxygen levels.

The industry for electronic medical records EMRs is currently making improvements aimed at further specializing EHR systems to streamline workflows, increase productivity, and enhance doctor-patient interactions. Therefore, it appears that EHRs will remain influential in the healthcare sector in the future.

how can we help you?